We’re thrilled to announce that all of our apps have been upgraded from REE to Ruby 1.9.3. We wanted to share some notes about what went well, what went wrong, and what we learned in the process.

The vertical red line marks our update to Ruby 1.9.3, and as you can see, the results were impressive (lower is better). Our average response time dropped from around 150ms per request to around 50ms. 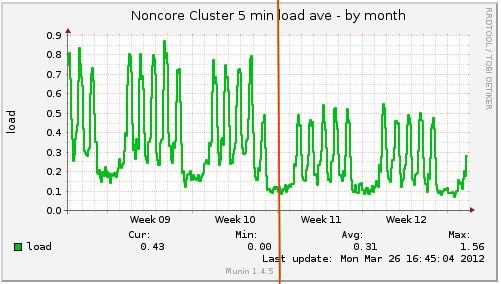 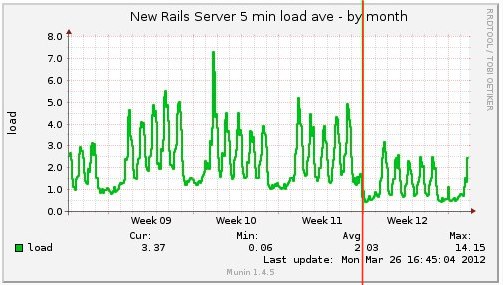 The first graph shows our server load for our non-core apps (Co-op, our forum, and some internal tools), and the second graph shows the load for our marketing site and for the main Harvest application.

Importantly, during the period shown in all the graphs above, our traffic volume was increasing steadily (and sometimes dramatically), and yet our resource usage still decreased with the upgrade.

Aside from those server-side gains, we enjoyed some local benefits as well. I did some benchmarking of our test suite for Harvest before and after the upgrade, and our suite runs 12.67% faster on Ruby 1.9.3, which saves us a few minutes on every run.

We upgraded six different apps from REE to 1.9.3. Our goal was to start with the smaller apps first and slowly learn our way up to the main Harvest application. Ultimately, I think this worked out well — we discovered a lot of the smaller gotchas earlier in the process on our simpler apps, and weren’t sent on quite as many wild goose chases in the more complicated ones.

As we moved to each new app, our general procedure stayed roughly the same:

To run through these steps for each app was actually a surprisingly quick process. This blog and our forum each took less than one day, our marketing site took less than two days, and Co-op and Harvest each took just a week, although that was with the full-time focus of two developers (myself and prime hacker Barry Hess).

We were able to upgrade Ruby on all of our application servers without any downtime by using Chef and the nginx Healthcheck module (special hat-tip to the dev-ops wizardry of our very own Warwick Poole).

On the whole, the upgrade was a smooth affair, but we still needed to make a fair number of updates and ran into a couple of problems along the way.

The majority of our test failures and errors were caused by assorted syntax updates and deprecations in 1.9.3. Most of these were pretty minor, but were often hard to hunt down (like the changes to to_s for many-but-not-all classes).

This list is not exhaustive, and we found many more in our pre-upgrade research that didn’t hit us (Hash#key was replaced with Hash#index, Hash#select now returns a Hash instead of an Array, Object#type became Object#class, etc.), so your mileage may vary.

FasterCSV has been brought into the 1.9 standard library and is now just CSV.

Most of the fixes to handle this were pretty easy: simply update the class name from FasterCSV to CSV, then make some straightforward updates to the new CSV reading and writing methods. That knocked out almost all of our issues.

Two edge cases ended up taking up the majority of time spent on CSV fixes: properly handling imported CSVs with BOMs and with carriage returns. Let’s ignore those particular fixes, though, and focus on why this is another great example of why having an exhaustive test suite is a very good thing.

We probably would have never thought to check for these edge cases in our QA, but luckily, they’re covered by tests in our suite. If those tests weren’t there, we probably wouldn’t have known those problems existed until a customer unsuccessfully tried uploading an Excel-generated CSV, leading to a support ticket and wasted developer time to fix a bug that we’ve seemingly already fixed once before.

So write those tests.

Encoding ended up being our biggest real world problem, because it didn’t bite us until we went to production with Co-op. We weren’t the only ones to experience this pain.

If you’re interested in the ins-and-outs of encoding in 1.9, check out James Edward Gray II’s 11 Part Series on Character Encoding in 1.9.

Most of our problems in development were relatively minor and fixed with magic comments.

Our big problems came up in production with data that had been stored as one encoding but now was coming out and assumed to be in UTF-8.

We think so. There has been plenty written about the theoretical speed increases you’ll see with Ruby 1.9.3, but we’re glad to share that we’ve seen significant wins in our complex real-world applications and in our local environments with just a couple of weeks of development.